All five applications are in response to a county-initiated process to establish a Commerce Future Land Use category in the Agricultural Reserve to allow light industrial projects. The County Commission is set to vote on this in August. 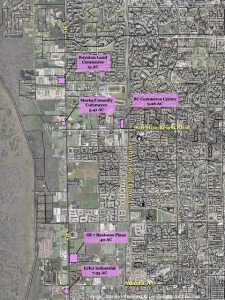 Amid huge demand for industrial space throughout Palm Beach County, all of the industrial land along Atlantic Avenue just east of State Road 7 has been approved for development and there’s a need for more development to serve the residents, said Lauren McClellan, senior project manager for Palm Beach Gardens-based JMortan Planning & Landscape Architecture, which represents all five land use applications.

“Now that most of that pre-existing industrial land has been entitled, it is apparent that the demand for various types of industrial space (including but not limited to office warehouse, landscape services, cold storage, and last mile distribution) continues to grow,” McClellan said. “If the Board of County Commissioners adopts the Commerce language in August these five applications will become requests for the Commerce Future Land Use designation.”

Gunster attorney Brian Seymour, who represents Fort Lauderdale-based BBX Capital Corp. in the largest application, said it was filed so the company could get a head start on the long process of a land use change amendment so it will already be in the works should the County Commission approve the Commerce designation. He noted that the light industrial category would not permit heavy industrial uses or self-storage facilities, but it would be appropriate for small-bay warehouses, last-mile distribution centers, and cold storage.

David A. Menchof, an associate professor of supply chain and operations management at Florida Atlantic University, authored a letter for BBX stating that building last-mile distribution centers in the Agricultural Reserve would reduce traffic because goods can reach residents there faster without having to be delivered from distribution centers further away.

Here’s a look at the five applications:

The County Commission is also considering a county-initiated land use change to permit apartment projects there.