Sky-high towers as tall as 500 feet could start cropping up all over Fort Lauderdale, critics fear.

It could happen if a controversial proposal goes through that would raise the height cap to 500 feet on projects that get special zoning. The new ordinance would apply citywide, not just in high-rise-friendly downtown, where zoning already encourages supersized towers. So far, the idea is getting a chilly reception.

“We are not Sunny Isles. We are not Miami. We are not New York,” said longtime resident Nancy Thomas. “I’d rather have it shorter and denser. If we get into this height request we’re going down the wrong path. We are going to start looking like Sunny Isles.”

John Burns, president of the Venetian Condo Association, also has reservations about making such a drastic change that would apply to the entire city.

“Once it’s there, everyone’s going to want it,” Burns said. “You could have 500-foot buildings popping up everywhere. It’s a dangerous path.”

Some are wondering what’s behind the push for taller buildings. Look no further than the plan for Pier Sixty-Six. Tavistock, the developer redeveloping the landmark site, wants to build three luxury condo towers that would rise 480 feet high in a neighborhood with a height cap of 120 feet.

“Proposing taller buildings with fewer residential units and less commercial uses will significantly reduce traffic, preserve views and create more open space — all things that we heard were imperative to our neighbors,” said Jessi Blakley, vice president of the Orlando-based Tavistock Development Company. “Our vision will make Pier Sixty-Six a destination gateway and icon once again.” 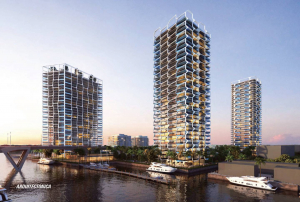 The developer revamping the Pier Sixty-Six property in Fort Lauderdale hopes to build three luxury condo towers that would rise to 480 feet. Two towers would sit on the south side of the 17th Street Causeway bridge and the third would sit on the north. The plan is not an option unless the commission changes the code to allow building heights of 500 feet outside the downtown area. (RENDERING CREDIT: Arquitectonica)

The vision is not an option unless the city commission changes the code to allow building heights of 500 feet outside the downtown area for projects that apply for Planning Development District zoning. The current code, in place since 2013, caps the height at 300 feet. The code would need to be rewritten, changing the height cap from 300 feet to 500 feet to pave the way for developers to build higher. And the change would require commission approval.

Outside downtown, a developer needs at least two acres to apply for the PDD zoning. Only half an acre is required for properties downtown. It was unclear whether that would change as well.

At a recent City Hall meeting, longtime resident Marilyn Mammano warned the commission they’d be opening up a can of worms by changing the code.

“No one is demanding taller buildings. This is being done at the developer’s request,” said Mammano, president of the Harbordale Civic Association.

Commissioner Heather Moraitis countered that many of the projects are considered high-end and would not help boost affordable housing units throughout the city. The mayor and the commission suggested city staff seek feedback from neighborhood leaders and report back before any commission vote is scheduled.

“Let us not be the ones to decide,” Trantalis said. “Let the community decide.”

Staff is planning to present information in November to the Council of Fort Lauderdale Civic Associations, but is welcoming comments at any time, according to a city email dated July 15 that went out to neighborhood leaders.

Leslie Fine, whose condo sits on Fort Lauderdale’s Galt Ocean Mile, didn’t get the email but has a message for the city: This is a bad idea.

“This is not Dubai,” Fine said. “Why does everything have to be so tall? It’s not like people come here because we have tall buildings. It puts more stress on the streets, the sewers, the waterways, the storm drains. Those tall buildings can cast tall shadows. And the roads can’t handle the people we have now.”

“Everybody is concerned about this,” Peloquin said. “Tall buildings all sounds fine until they come to your neighborhood. Tall buildings make residential backyards not private. Tall buildings are great downtown but we don’t have any workable mass transit. And that needs to be fixed if we’re going to have a dense area downtown and in other areas.” 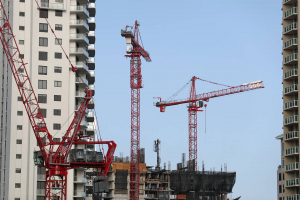 Construction cranes abound on Wednesday in downtown Fort Lauderdale. A new proposal would pave the way for 500-foot-high towers throughout the entire city. And the critics are already lining up. (PHOTO CREDIT: John McCall /South Florida Sun Sentinel)

The RAC has no height cap, but so far the tallest building downtown (100 Las Olas tower) stands at 499 feet, a foot under the 500-foot limit set by the FAA. That could change if the FAA says yes to new development requests to build towers closer to 600 feet.

Jim Concannon, president of the Sunrise Intracoastal Civic Association, says he understands the push to allow taller buildings. But he worries it could change the character of neighborhoods outside downtown.

“There’s no question that the city is going to be growing a lot,” Concannon said. “And the only way to go is up. But you’re losing that small-town character. By allowing 500-foot buildings to be anywhere in Fort Lauderdale, you’ve changed the character of the city.”

Local developer Charlie Ladd declined to say whether it was a good idea to change the height cap, but did say it’s important for the residents to be onboard.

“These are big changes to our city,” Ladd said. “We all need to be on the same page. We need to make sure we get it right when these other portions of the city look to redevelop.”

This week, Trantalis had more tempered comments about the whole plan.

“I think there needs to be significant community outreach,” Trantalis told the South Florida Sun Sentinel. “I’m not hearing a lot of support for it, but the process is still ongoing and we are trying to be objective about the issue. I don’t think there’s much of an appetite on the commission to change the ordinance since it would affect properties citywide. We realize the growth needs to focus on the downtown area and not impact neighborhoods that have long been established.”

Real estate analyst Jack McCabe says he would expect an outcry from residents across the board if the commission were to approve the plan. He pointed to the wall of condos that line the beach in Surfside.

“There’s so many condos so close together, the locals call it the wall,” McCabe said. “And you can’t see the beach by noon because of the shadow. If you could make a case that Fort Lauderdale is built out and they need 50-story buildings all over town, maybe then there’s a reason to change the rules. But people are going to be up in arms if all these 50-story towers start going up blocking their views and snarling traffic in an already snarled traffic system.”