After having worked on numerous condominium developments, he co-developed a project in Bay Harbor Islands, near Miami, that had a marina component with 14 slips. Seeing the high demand for them, his firm went on to buy marinas in the Florida Keys and even develop a marina arm within the company.

“The boater demand is growing like crazy, but the supply of new marinas is obviously not moving too much,” Ballestas said during a Bisnow webinar about the future of marinas Nov. 4. “That supply/demand constraint is where we think that the opportunity lies in the space.”

Powerboat sales had already been seeing consecutive year-over-year growth this past decade, and the industry exploded since the coronavirus pandemic began. According to the National Marine Manufacturers Association, 115,000 new powerboats were sold in May and June alone, a 30% increase over the same time period last year. Additionally, Europe exports nearly $20B worth of boats each year. This is fueling demand for marina space.

Seahaven Superyacht Marina Harbormaster Marieke van Peer agreed. “The water space is so limited that the only way to go is up, in my opinion.”

Matheson’s company is developing marinas in the U.S. and Central America. A focus is on taking boats that are 30 to 50 feet in length, moving them to dry storage where they can be stored and retrieved with automated high-tech systems, and leaving space at docks for larger vessels. 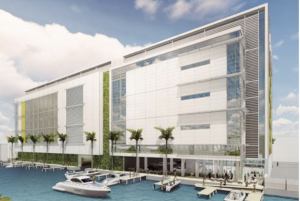 “Your boat and all of its dimensions and information is programmed in the computer,” Miller said. At the push of a button, it can be plucked and dropped into the water.

While seeing demand from new boaters, marina developers are also facing resentment from middle-class boaters who feel that access to the water is being hijacked by private interests.

“Developers can get around that by focusing on visual appeal,” Matheson said, “Particularly if it’s a dry stack marina, and in the case of F3 Fort Lauderdale, there’s a perception that these buildings are these old corrugated metal panel buildings with noisy forklifts flying boats around. Nobody wants to have that in their neighborhood, so we had to demonstrate that this is a completely different building.”

Optimum Asset Management USA Managing Director Matthew Barry is based in Miami and runs a fund out of Luxembourg. He is currently invested in the Monaco Yacht Club in Miami Beach, which has 39 residential units and 12 boat slips. Barry suggested that marina developers work harder to reach out to their adjacent communities.

One of the slips at Monaco Yacht Club is reserved for the whole building to use and a boardwalk along the back of the building allows public access directly to the water.

“While there are different considerations for all types of marinas, from boat storage facilities to destination marinas, developers should appeal primarily not to boat owners, but to their staff. Amenities like gyms can be key,” Van Peer said. “A happy crew is a happy captain, and a happy captain will keep coming back to the marina.”